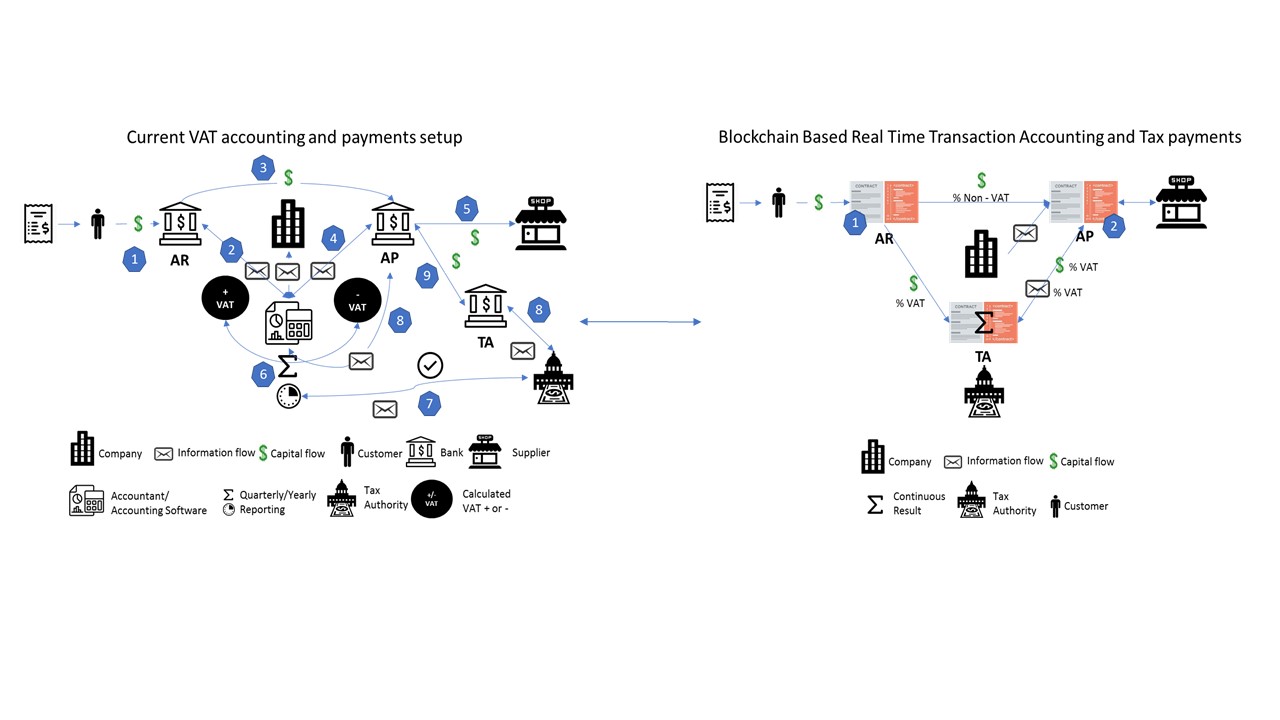 Start of the disruption of the tax and accountancy world by reinventing tax payments and charges as result of blockchain?

This article was originally posted on linkedin.

For many companies, the process of tax payments and charges can be a heavy administrative burden on their time and resources. This is especially the case for small and medium enterprises. The alternative to doing this in-house is engage an external accountant, but that is quite an expensive alternative.

Why is it that e.g. the value added tax (VAT) process is either so time consuming or expensive? This is largely due to the way the tax system has historically evolved combined with the periodic batch orientation we do use nowadays. Tax returns and settlements are calculated over a fixed period of time such as a  quarter or a year, and to complicate it even further, not based on actual transactions, but on arbitrary dates, like invoice dates.

Blockchain has to potential to change many industries. Much is the same for finance, accounting and taxes. In this opinion article, I will show how blockchain and smart contracts in particular can change the way we handle taxes completely. This by implementing real time tax, meaning real time as the payment or charge is automatically done in every incoming and outgoing single transaction, resulting in:

The example given in this article focuses on simple VAT payments and charges related to regular purchase and sales transactions, but can easily be expanded to more complex VAT scenarios or other kind of taxes.

Below one can see a simplified schematic overview of how the VAT (“BTW”) process in the Netherlands works,  which is similar to the VAT system in other countries.

The current process had the following steps:

This (simplified) schematic, does not take into account any deposit construction. This is a long process, vulnerable to mistakes, with a lot of work done post transaction including multiple checks and balances. Companies run the risk of significant reconciliations if they don’t reserve enough cash, which can negatively influence their cashflow.

The amount on the smart contract of the tax authority is thus the nett amount of credits and debits at any point in time of the incoming VAT and the outgoing VAT, thus automating VAT reporting in the payments. Providing audit trail and evidence is now also extremely simplified as all transactions are registered and visible at the smart contract’s address, so any incoming and outgoing transaction is automatically reported to the tax authority as well in the transaction itself. This reduces errors and fraude significantly.

Benefits of blockchain over current process

A real time blockchain based tax accounting system has many benefits over the traditional batch oriented accrual approach. :

But most significantly, we can change to a real time system which is more closely aligned to a company’s cash flow instead of accruing batches of payments over long time periods, so when a company actually pays or receive money and thus making it fairer and more transparent.

And probably there are many more benefits at a macro-economical level if one would implement a real-time tax system.

If we expand beyond VAT to other tax payments and charges, one can imagine many more simplifications, but also various (unexpected) challenges.

Amongst other simplifications or improvements are;

There are various (sometimes unexpected) challenges as well:

Will blockchain force us to rethink our accounting and reporting system? Given the complexity, a real time tax system will not be implemented within the next few years. But it offers a radically new perspective for accounting and tax systems and it can result into a wide range of operational finance simplifications!

Actually this future might be closer, as you can find a slide share of our demo for the system presented in this article here.

Although there are some tax authorities seriously exploring blockchain, I would like to see a tax authority trying this model, at least as a pilot, as this is could not just be a blockchain based process improvement, but a transformation of how we deal with taxes (and with this – accounting)!

You can also join our free discussion webinars: