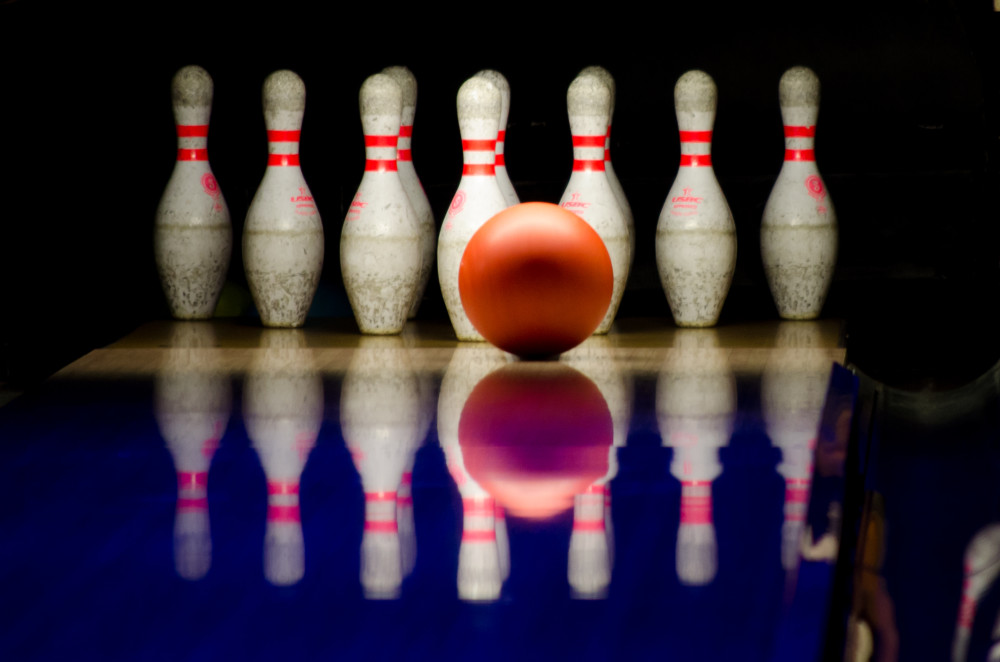 AXVECO performed a short survey among Dutch Financial Institutions to establish whether the three lines of defence model was still viewed as valid and identify implementation challenges.

We received a large number of responses (62) from senior risk managers. 40% of respondents represented the banking sector, 24% insurance, 12% asset managers and 24% other (including consultants and regulators). The results are presented in this paper, combined with our knowledge and experience from interactions with senior business stakeholders.

Risk governance and the three lines of defence model

Risk Governance can be defined as the subset of corporate governance decisions and actions that ensure effective risk management, including organisational structures, policies, processes and decision-making within the area of risk. Article 22 of the European Capital Requirement Directives (CRD 2006/48/EC)[i] requires, that every credit institution has robust governance arrangements, which include a clear organisational structure with well defined, transparent and consistent lines of responsibility, effective processes to identify, manage, monitor and report the risks it is or might be exposed to, adequate internal control mechanisms, including sound administrative and accounting procedures, and remuneration policies and practices that are consistent with and promote sound and effective risk management‟.

The most important reference work in the field of Risk Governance is the European Banking Association’s (EBA) “Guidelines on Internal Governance (GL 44)” [ii]. These guidelines have been issued by the EBA after a survey conducted in 2009 by the Committee of European Banking Supervisors on the implementation by supervisory authorities and institutions of its Internal Governance Guidelines in response to the issues highlighted by the financial crisis[iii].

The EBA GL 44 guidelines, applied by the Dutch National Bank when reviewing governance structures, are consistent with the well-known three lines of defence model. This is a simple model, with each “line” playing a critical role in the governance of the risks the organisation is facing (see figure 1): 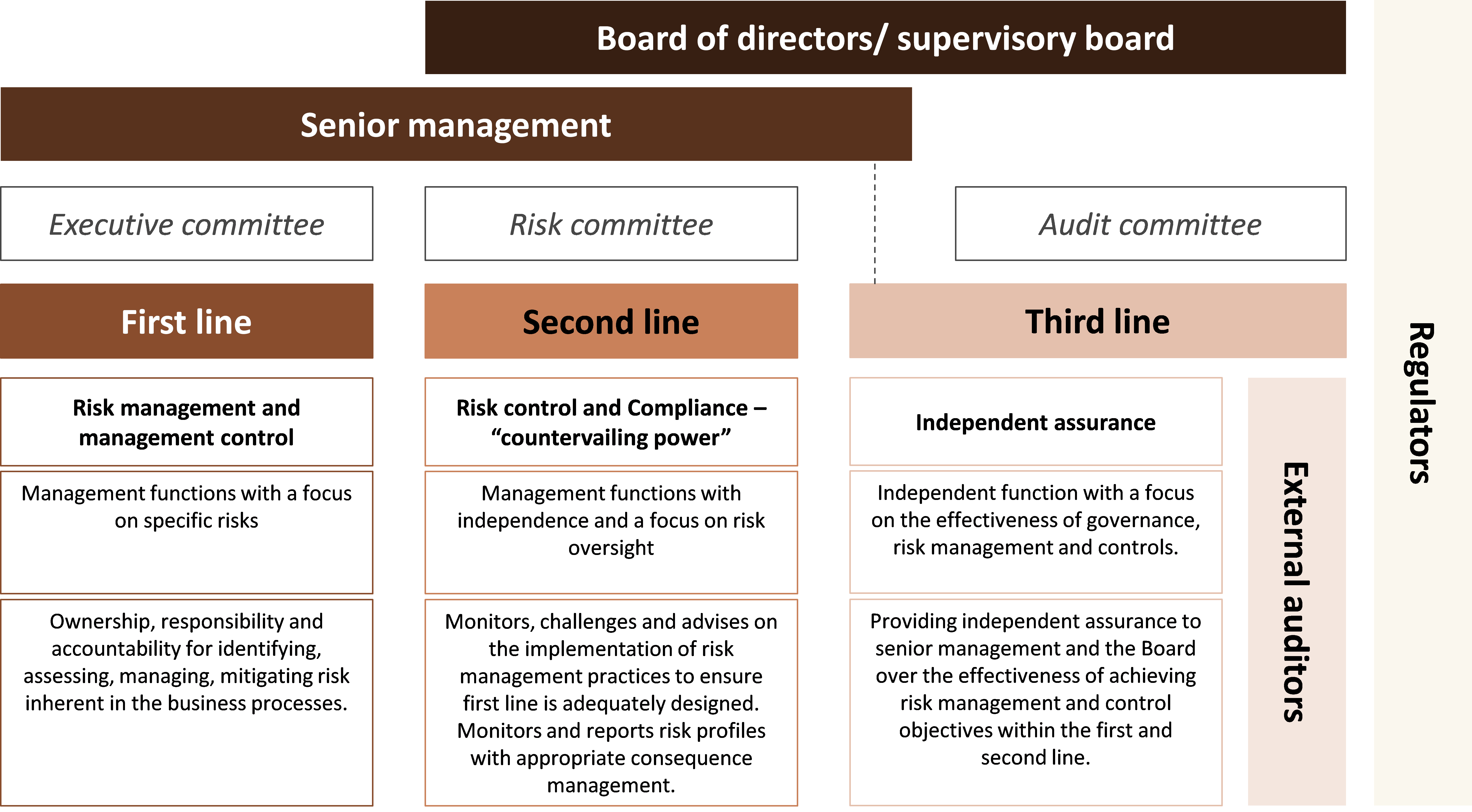 Figure 1: Generic articulation of the three lines of defence

The three lines of defence model remains valid, but is highly dependent upon implementation at all levels

The three lines of defence model describes how specific duties related to risk and control could be assigned and coordinated within an organisation. An effective model will help an organisation to achieve its objectives with effective management of risk. Therefore, on paper the model remains valid and all three lines of defence (in some form) should exist in all organisations. Our survey shows that all FS organisations do indeed adopt some form of the model. See figure 2 for example functions and activities across the lines. So far so good.

In practice, however, the model has attracted significant criticism. It has been accused of becoming a box-ticking exercise promoting a ‘misplaced sense of security’. Following numerous, recent major incidents (internal fraud, excessive risk taking, material misstatements or misconduct), the effectiveness of the three lines of defence model has been called into question. This in turn raises questions about whether additional efforts are needed to fully embed the underlying philosophy.

Figure 2: Example functions and activities across the lines of defence

The five implementation inhibitors described above do not invalidate the model itself, but undermine its implementation in practice. The Pavlov reaction within many organisations when fixing a control breakdown or remediating a large incident is to invest in hard controls: clarify organisational models, roles and responsibilities, enhance risk management frameworks, processes, instruments, methodologies and controls with more documentation of policies and procedures. For example, organisations should ensure that enhanced cooperation exists between the individual risk functions within the second line of defence (Financial Risk Management, Enterprise-wide Risk Management, Operational Risk Management, Information Security and Compliance) and with the other business functions such as Human Resources and Information Technology as well as across the other lines, to address the silo mentality.

In many cases, the maturity of such hard controls needs enhancing, but this cannot be the whole answer to fully resolve the implementation challenges. The hard controls will only be effective when operating in combination with soft controls since Risk Governance is fundamentally linked to an organisation’s self-awareness of its balance between risk-taking and control. Risk Governance should a belief, a way of thinking and embedded within the organisation’s DNA through soft controls such as core values, risk culture, involvement, empowerment, transparency and tone at the top.

Effective Risk Governance can only be implemented with active support and guidance of the organisation’s Senior Management and Board. They set the context for establishing the best governance structure to manage the risks within the organisation and they should be explicit in articulating their appetite for risk in the achievement of the organisation’s objective. They should ruthlessly hold the first line of defence accountable for the management of risks and controls and align incentives and remuneration with these accountabilities.

Further, they should give the second line sufficient mandate that empowers them and obtain the authority to advice and challenge the first line when needed. We see a desire to move away from the second line in a “police men” role towards an effective and credible countervailing power. IN our opinion, this require a new type of professional within the second line; namely, one that understands the business holistically (strategy, finance, operations and risk), has strong relationship building and communication skills.

Finally, Business environments are becoming increasingly complex with the transition to digitised service delivery, raising concerns around integrity and misconduct, and evolving sophistication in financial crime. Achieving effective Risk Governance is a continuous process within a dynamic environment that includes a review of the three lines of defence model on a regular basis.

Exhibit 1: Survey findings – The allocation of activities across the three lines of defence model today has resulted in ambiguous responsibilities

It is not uncommon to observe second line functions performing first line activities such as process documentation or internal control. This can result in key second line activities not being performed at an adequate level and risks not appropriately managed. The areas causing the most confusion (see figure 3) are control testing, legal, Business Continuity Management, IT security, internal control (AO/IC), setting risk appetite, monitoring KRI’s, Risk and Control Assessments and maintaining an appropriate risk culture. IT Risk Management for example is often located in the IT organisation, despite being a key part of Operational Risk Management. 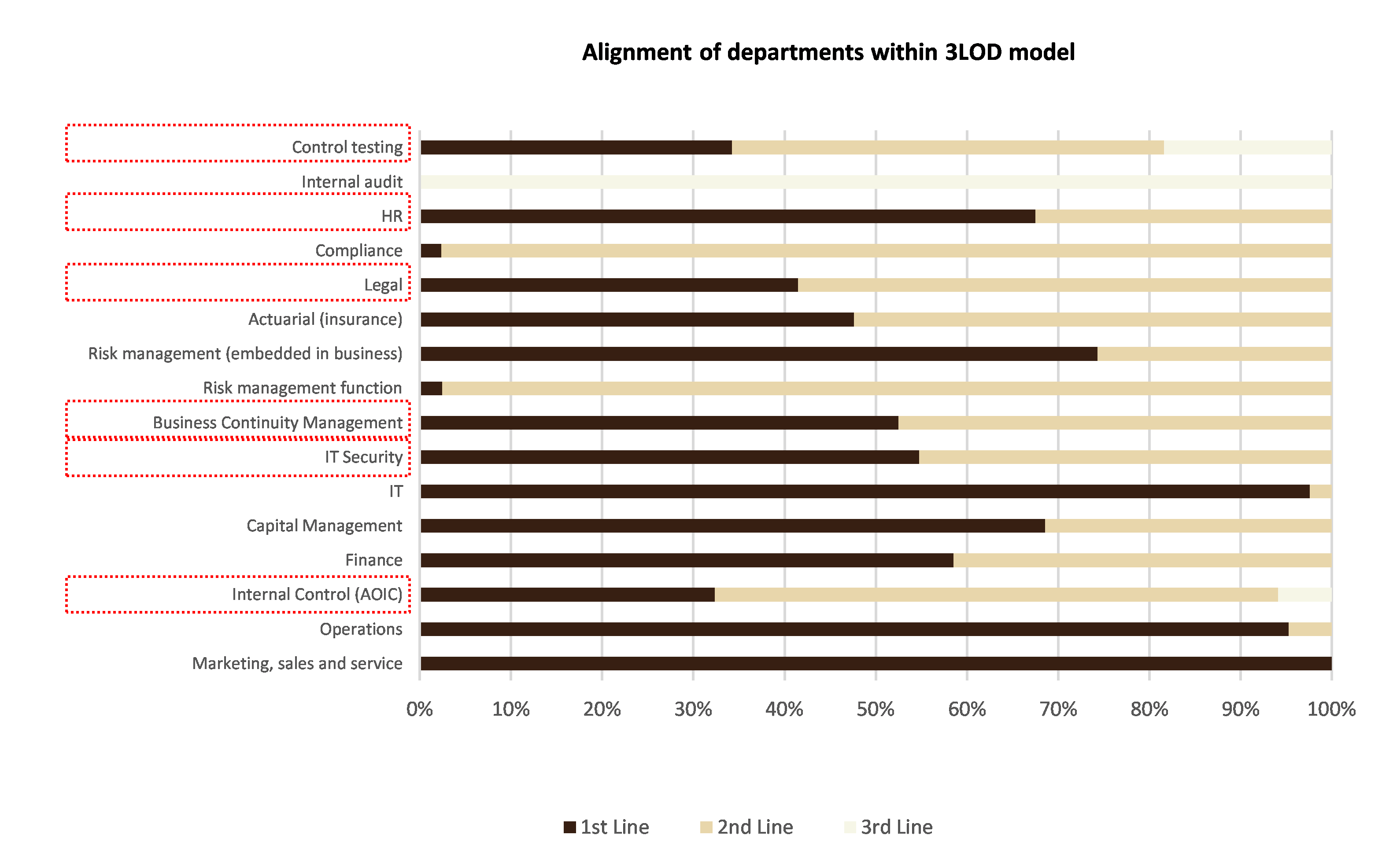 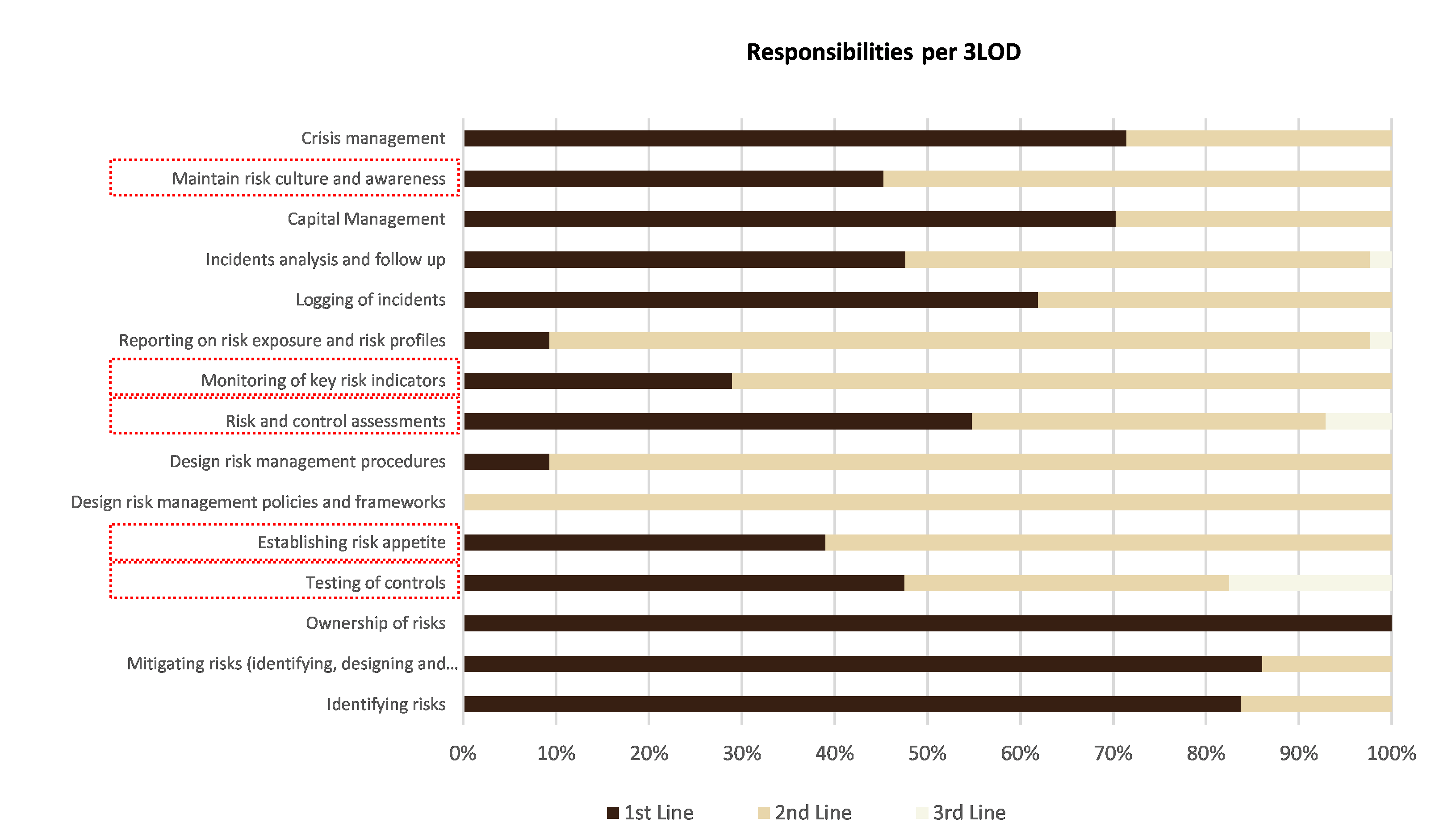 Figure 3: Alignment of departments and responsibilities

The effectiveness of the second line of defence is heavily influenced by the way the multiple functions and disciplines are organised. The results of our survey indicate that there are three common structures for the second line (see figure 4):

Many risk managers indicate that their model has emerged over time and is dependent upon the presence and skills of specific people. The organisation is often built around the senior risk leaders. There is no clear evidence that one model is superior to others: the better performers in our AXVECO ORM benchmark apply varying models. Each model has been accepted by regulatory authorities while the GL 44 guidelines recommend that Compliance be split out for larger institutions (model c). We have included the features of each model and reasons for organisations to adopt the models in figure 4. 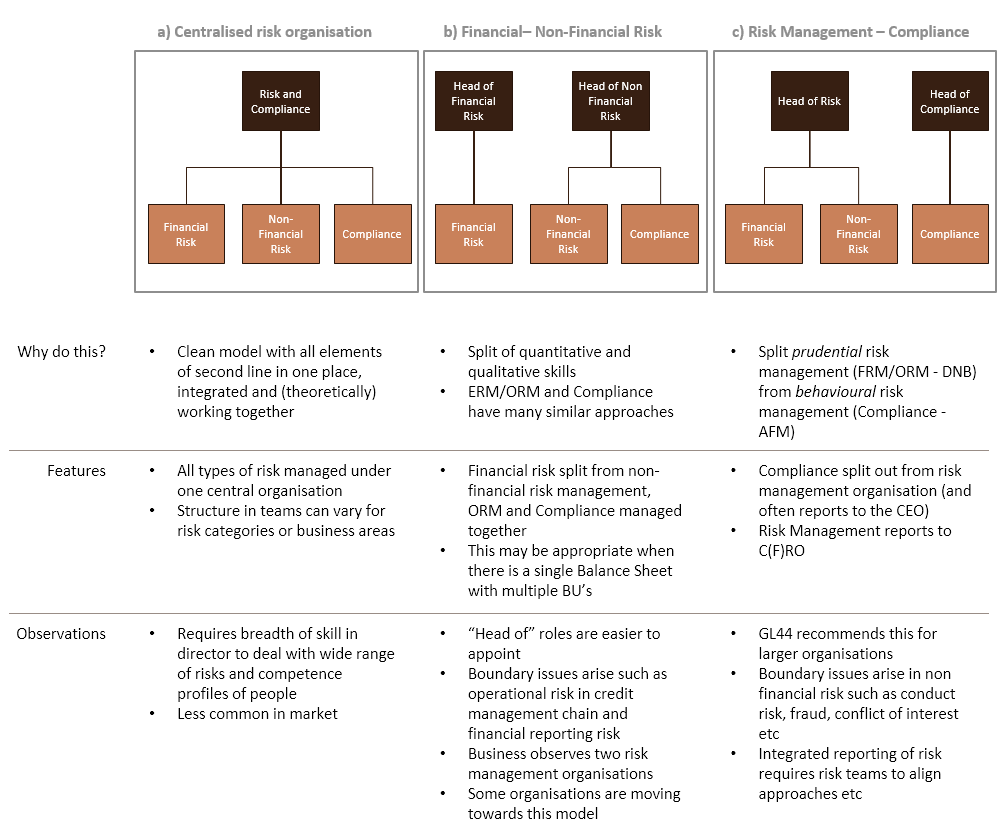 The route to a strong risk culture – 5 tips 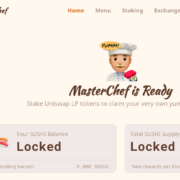 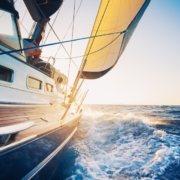 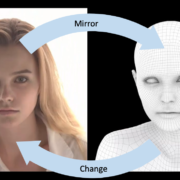 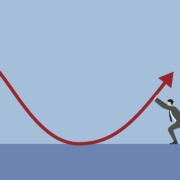 Data Driven through the Downturn
Blockchain in public services

We may request cookies to be set on your device. We use cookies to let us know when you visit our websites, how you interact with us, to enrich your user experience, and to customize your relationship with our website.

Click on the different category headings to find out more. You can also change some of your preferences. Note that blocking some types of cookies may impact your experience on our websites and the services we are able to offer.

These cookies are strictly necessary to provide you with services available through our website and to use some of its features.

Because these cookies are strictly necessary to deliver the website, refuseing them will have impact how our site functions. You always can block or delete cookies by changing your browser settings and force blocking all cookies on this website. But this will always prompt you to accept/refuse cookies when revisiting our site.

We fully respect if you want to refuse cookies but to avoid asking you again and again kindly allow us to store a cookie for that. You are free to opt out any time or opt in for other cookies to get a better experience. If you refuse cookies we will remove all set cookies in our domain.

We provide you with a list of stored cookies on your computer in our domain so you can check what we stored. Due to security reasons we are not able to show or modify cookies from other domains. You can check these in your browser security settings.

These cookies collect information that is used either in aggregate form to help us understand how our website is being used or how effective our marketing campaigns are, or to help us customize our website and application for you in order to enhance your experience.

If you do not want that we track your visit to our site you can disable tracking in your browser here:

We also use different external services like Google Webfonts, Google Maps, and external Video providers. Since these providers may collect personal data like your IP address we allow you to block them here. Please be aware that this might heavily reduce the functionality and appearance of our site. Changes will take effect once you reload the page.

The following cookies are also needed - You can choose if you want to allow them: